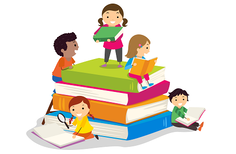 ​We start introducing children to Reading through Letters and Sounds. Please click here to learn more.
​Aspect 1 - General sound discrimination - environmental
The aim of this aspect is to raise children's awareness of the sounds around them and to develop their listening skills. Activities suggested in the guidance include going on a listening walk, drumming on different items outside and comparing the sounds, playing a sounds lotto game and making shakers.
Aspect 2 - General sound discrimination - instrumental sounds
This aspect aims to develop children's awareness of sounds made by various instruments and noise makers. Activities include comparing and matching sound makers, playing instruments alongside a story and making loud and quiet sounds.
Aspect 3 - General sound discrimination - body percussion
The aim of this aspect is to develop children's awareness of sounds and rhythms. Activities include singing songs and action rhymes, listening to music and developing a sounds vocabulary.
Aspect 4 - Rhythm and rhyme
This aspect aims to develop children's appreciation and experiences of rhythm and rhyme in speech. Activities include rhyming stories, rhyming bingo, clapping out the syllables in words and odd one out.
Aspect 5 - Alliteration
The focus is on initial sounds of words, with activities including I-Spy type games and matching objects which begin with the same sound.
Aspect 6 - Voice sounds
The aim is to distinguish between different vocal sounds and to begin oral blending and segmenting. Activities include Metal Mike, where children feed pictures of objects into a toy robot's mouth and the teacher sounds out the name of the object in a robot voice - /c/-/u/-/p/ cup, with the children joining in.
Aspect 7 - Oral blending and segmenting
In this aspect, the main aim is to develop oral blending and segmenting skills.
To practise oral blending, the teacher could say some sounds, such as /c/-/u/-/p/ and see whether the children can pick out a cup from a group of objects. For segmenting practise, the teacher could hold up an object such as a sock and ask the children which sounds they can hear in the word sock.
The activities introduced in Phase 1 are intended to continue throughout the following phases, as lots of practice is needed before children will become confident in their phonic knowledge and skills.
​
JOLLY PHONICS

​​Alongside Letters and Sounds we have a sound of the week. For this we follow the sequence of sounds introduced through Jolly Phonics.​ Letter sounds are taught in a particular order to allow for early segmenting and blending. Teaching is multi-sensory and active, with fun actions, stories and songs. Parents/ carers are informed of the letter sounds via the parent notice boards. If you would like more information please click here to see more.​
​PRE-READING SKILLS
Ways to help:
Matching
-Card games
-Dominoes
-Matching shapes, pictures and letters
-Pairing up socks from the laundry
-Shape sorters
-Jigsaw puzzles
Rhyming
-Nursery rhymes
Miss of the end of rhymes for your child to complete, e.g. "Humpty Dumpty sat on a wall, Humpty Dumpty had a great...?"
When that gets too easy for them, make it harder! "Humpty Dumpty sat in a tree, Humpty Dumpty had a cup of ...?"
-Rhyming games e.g. "I Spy with my little eye, something that rhymes with 'fox' e.g. (box)
Letter Skills
-Introduce letters and their sounds gradually
-Start with letters that are important to the child, such as their initial
-Use letter sounds rather than names - 'a for ant', not 'ay for ape'
-Generally, stick to lower case letters to start with, except for the first letter of a name
-Use magnetic letters
Direction
When reading to a child, follow the print with your finger
Ask them where you should start - read the words in reverse order, to demonstrate that the story doesn't make sense if you don't start in the right place
Use tracing cards which reinforce left-right direction, such as exercises for the child to draw a line to take the bunny (on the left) to its hutch (on the right)
Motor Skills
Drawing and painting with lots of different tools and materials
Playing with small toys e.g. construction sets will help to develop fine motor skills
Use scissors
Concepts of Print
Read books!
Talk about the books you read- point out the title/ ask them what they think the book will be about, etc.
Use props
Tell stories with no book
Language Skills
Having conversations
​
© Copyright 2018 Westfield Nursery School